If you are looking for a nice, affordable, entry-level film camera, look no further than the Pentax. Vintage model Pentax cameras have only the basic features needed to produce a clean, crisp image and are a great option for your first 35mm film camera. These cameras have limited features, making them easy to maintain, yet they have exactly what you need to take beautiful, artistic pictures. You can easily find used Pentax cameras on Amazon and eBay.

Film cameras have come a long way since the 1800’s and are still popular among many photographers despite their competition with digital cameras. One of the biggest advantages of film cameras is that most don’t require batteries. If you are heading out for a long day of shooting with a digital camera or using the camera in your phone, you may need to recharge after just a few hours. If you’re using a film camera, even one that uses batteries, you can shoot for an indefinite amount of time without worrying about losing power.

Another benefit to film photography is the high quality and resolution of your images. Resolution for a film camera is determined in part by the speed of the film used, so the resolution can easily and be changed at relatively a low cost. With a digital camera, the resolution is determined by the technology, with a higher price tag for higher resolution.

If you are looking for an affordable film camera, you may want to consider buying a used or vintage camera. A true vintage camera is between 25 and 99 years old, which has been discontinued and no longer produced by the manufacturer. Popular camera brands that have withstood the test of time include Pentax, Nikon, and Canon.

There are still many photographers and artists who prefer film cameras, specifically, the vintage ones. Some choose them because of nostalgia reasons, while others claim film photography produces a better-quality image.

You can find vintage cameras online, in antique shops, and even at your local thrift store. Before purchasing, you should check with the seller to make sure that the camera is functional and will produce decent images. It is not unusual to have to purchase replacement parts to make a used camera fully functional. Because of the simplicity of older cameras, repairs are actually quite easy. In fact, most of the time, vintage film cameras just need a thorough cleaning to start working again.

Pentax is a Japanese camera company that began as the Asahi Optical Company in 1919. The company started producing cameras for other companies in the early 1930’s. They continued to produce lenses for various companies, becoming known for their interchangeable lens technology.

Asahi produced their first camera in 1952. Pentax was one of their 35mm single-lens reflex (SLR) cameras, which debuted in 1957. The name comes from the shape of the prism, a pentaprism, used in SLR cameras. Due to changes in the company and the popularity of the Pentax camera, the Asahi Optical Company became Pentax in 2002. 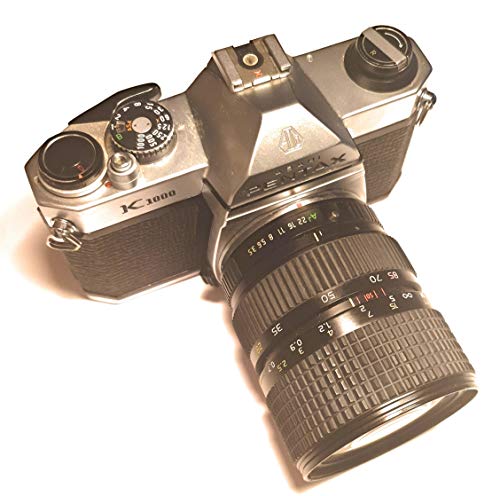 The Pentax K models began production in 1975, with the K1000 being introduced in 1976. It is a popular camera model for photography students because of its simplicity and affordability. It was discontinued in 1997 after 20 years in production, but it is still easy to find and purchase online.

The K1000 is a 35mm film SLR camera set apart from earlier Pentax models because it is devoid of the lens mount, self-timer, depth of field preview, and separate meter on/off switch. As per cameras of its time period, it is considerably heavy and bulky. Despite its drawbacks as a fully manual mechanical camera it has survived because of the simplicity of its features: 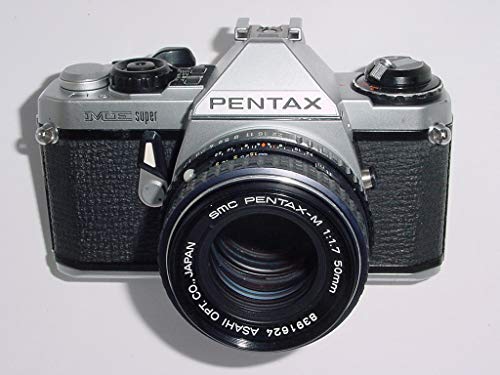 The Pentax M series cameras are compact in size and are some of the smallest 35mm SLRs produced. Despite their small size, they do tend to be quite heavy and at times awkward to handle. The ME was introduced in 1977 and features aperture-priority only automation with no manual override and an electronic focal plane shutter from 8s to 1/1000, synchronized at 1/100. This camera can be found in a chrome or black finish, as well as a limited edition, the ME SE, with brown leather covering the chrome finish.

Features of this camera include:

The Pentax ME is very small for an SLR camera and is smaller than K1000 model. Even though it has a small body, one of its advantages is the huge viewfinder. The ME is aperture priority only, which some photographers find to be limiting. At the time it was in production, the ME was a top seller boasting high quality, easy loading, simple aperture mode, and faster sync speed.

Despite the benefits of the ME, most photographers feel the K1000 has a modest edge. It is just slightly larger and heavier, making it easier to hold and stabilize. Because the only battery feature is the light meter, you are still able to take quality pictures even if the batteries die. Overall, the K1000 gets better reviews because it is a good mechanical camera that is simple to operate and with limited features, there is less risk to damaging, making it extremely dependable.

Best Film Cameras for Beginners in 2021